A Comprehensive Travel Guide For Bermuda

What & Where Is Bermuda?

Bermuda is a cluster of 138 islands on the north Atlantic. Several islands are joined to the main island with bridges forming a landmass of about 21 square miles. Some mistake it to be a Caribbean island, it is not. It is a British Overseas Territory and administered independently as a country that is headed by the Premier. The resident population is around 65,000 and is a mix of whites mostly of British origin and blacks most of whose ancestry relate to African origin.
Bermuda is located off the US east coast and takes only 2 hours to reach by flight from New York. Several cruise lines operate regular cruise ships from New York, Boston, Baltimore etc to Bermuda during summer (May to October). A 7-day close-loop cruise between New York to Bermuda usually provides two & half days in the island and remaining days on the sea. While the island is often related to the infamous Bermuda Triangle, it is actually considered a paradise on earth and quite safe.
Boats on anchorage, Bermuda's Countryside Bermuda has 9 parishes or districts. Hamilton City is the capital of Bermuda and located centrally in Pembroke parish. This is the hub of commercial establishments, numerous shops, restaurants and bars. The Town of St. George is located at the eastern end (in St. George's parish) and close to the airport. It's a quaint laid-back town, a UNESCO World Heritage site and steeped with history. This is where the first settlement took place in Bermuda in 1609 and it became a British stronghold over time. And the Royal Naval Dockyard located in Sandy's parish at the west end is the main cruise port of Bermuda with many historic and popular attractions of its own.
Read: Parishes of Bermuda to know about all the places and the attractions they hold.
Read: Location of Bermuda to know where Bermuda is located and how can you get there.

If island destination is what you are looking for, perhaps you need to look no further than Bermuda - a nature's jewel. There are numerous lovely beaches and coves in the island and some of them have amazing pink sands and rock formations. The south shore of Bermuda is home to the best pink sandy beaches including the world famous Horseshoe Bay Beach.
Horseshoe Bay Beach, Bermuda Source: Wikimedia Commons
However there are several other sandy gems like Warwick Long Bay Beach... a relatively secluded but beautiful long expanse of sand, Jobson's Cove nearby offers a picturesque setting surrounded by large rocks. Tobacco Bay Beach at the eastern end is another popular beach with its own beach cafe and water-sports and has great rock formations. Bermuda's water is turquoise in color offering a picture perfect setting for beach sunbathing, swimming and snorkeling.
Read: The Amazing Beaches of Bermuda to know about all the great beaches in the island.
Snorkeling and Scuba Diving are two favorite water sports here and for good reasons... there are numerous underwater shipwrecks (some of which are in shallow waters), colorful coral reefs (many in shallows) and stunning marine life around the island. While you can snorkel from several beaches, there are snorkeling cruises that take you offshore to snorkel over coral reefs and even ship wrecks. There are over 300 shipwrecks around Bermuda many of which are excellent diving sites. There are several PADI certified dive operators offering both reef and wreck dives.
Catamaran sightseeing tour with snorkeling Photo: Restless Native
And there are several private operators who offer glass-bottom boat tours to show the marine life and corals from the comfort of a luxury boat while you can enjoy some snacks and drinks on board and listen to a live narration. And some offer sailing tours showing wonderful sunset while on sail and others combine various water-sports such as swimming, kayaking, paddle-boarding etc while anchoring near an offshore island with its own lovely beach where you can relax.
However, Bermuda's attractions are not limited only to water based activities. The land attractions are equally great... the National Museum of Bermuda located at the dockyard is home to a myriad of exhibits and artifacts that capture the history of Bermuda over the past four centuries including its maritime trades, dark history of slavery and evolution of its culture & heritage.
The Crystal & Fantasy Caves are two fantastic subterranean caves with their own large underground lakes... walk along the pontoon bridge over the lakes and experience stunning limestone formations hanging from the ceiling and rising from the bottom.
Bermuda Aquarium is the place to go and see the vast array of marine creatures and corals that are found in the Atlantic surrounding Bermuda. It also has a museum and a zoo. Gibbs Hill Lighthouse is the oldest cast iron lighthouse in the world and was once used to navigate the ships several of which had fallen prey to the treacherous reefs near Bermuda. Climb up the stairs and get a wonderful panoramic view of the parishes and Ely's harbor from the circular open balcony on top.
Gibbs Hill Lighthouse Tom Moore's jungle is a lush forested land with walking trails and you can find beautiful blue holes, hidden caves and explore many flora and fauna of Bermuda. There are many other excellent nature reserves & parks in the island where you can blend yourself with the nature. South Shore Park has a 1.25 mile sandy trail along the south shore and is home to several fabulous beaches and coves.
Years back Bermuda had a railway track covering almost the entire length of the island and it was laid mostly along the north shore. Railway was abolished and the track route was converted into a wonderful walking & cycling trail which now spans across 18 miles of the island. Not only can you explore the old railway route and trace the history, it is also one of the most  scenic trails to enjoy wonderful views of the water and landscapes of Bermuda.
Read: Top things to do in Bermuda to know all the great options of what to do here.
You can get around the island easily using air-conditioned and comfortable public buses and ferries. Privately operated taxis and minibuses are also popular transports in the island. Ample scooters, bicycles and even recently introduced battery operated minicars are available on rent to get around the island. But note that driving in Bermuda is on the left side of the road.
Read: Transportation in Bermuda to know about all transport and rental options and fares.
Being a sub-tropical island, the weather in Bermuda is pleasantly warm for most time of the year and people are even warmer. Bermuda never looks crowded. There are no billboards or neon signs, and relatively few cars to spoil the wonderful countryside. The houses with gabled limestone roofs and pastel colors fit beautifully into the landscape.
There are land tour operators who use vans or minibuses offering group as well as private tours to show you around the island and visit several attractions. Even the taxis can also be hired by the hour and the taxi driver doubles up as your tour guide to take you around... a great tour option too.
Read: Tours in Bermuda to know all options of touring Bermuda on land and water.
Culture & Tradition of Bermuda has evolved since the 1600s and so has its dining and culinary diversity... there are several traditional food & beverages that are extremely popular in the island. Codfish based food that originated from the early inhabitants of the island remains popular and there are several restaurants that proudly serve codfish breakfast. The tradition of elaborate English afternoon tea complete with finger sandwiches and sweets is followed island-wide. Island cocktails such as Rum Swizzle and Dark n' Stormy are overwhelmingly popular among tourists and locals alike.
Read: The Best Restaurants in Bermuda to know about great dining venues in the island.
Nightlife in Bermuda is far from being sedate. There are numerous bars & pubs (mostly concentrated in Hamilton and also in Dockyard and St. George) that serve amazing cocktails and some of them stay awake until the wee hours. When it comes to pubs and bars, Swizzle Inn located in Hamilton Parish (island's oldest pub), Hog Penny in Hamilton City and Frog & Onion at the dockyard are some of the forerunners. Hamilton city also has a few night clubs that offer live music and dance.
Read: Nightlife in Bermuda for complete information.
A visit to Bermuda won't be complete unless you do some shopping and take back home some unique souvenirs, gifts or keepsakes. There are local artists and artisans in Bermuda who make amazing handmade products including glass-made and other jewelry, pottery & cedar art works, paintings, and even perfumes. Bermuda Shorts originated in this island and are still worn by men for official purpose. There are stores in Hamilton that offer authentic Bermuda shorts. And there are numerous other stores and even vendor stalls selling accessories, branded stuff and lot more.
Read: Shopping in Bermuda to know about the shopping scene and the great stores.

If you are visiting Bermuda, take a look at the Bermuda eBooks that can help make a great vacation plan as you get to know about the best attractions, guided & self-guided tours, water sport & other activities, great dining & shopping options, vacation tips and lot more. 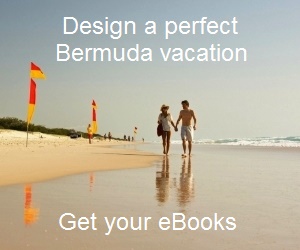